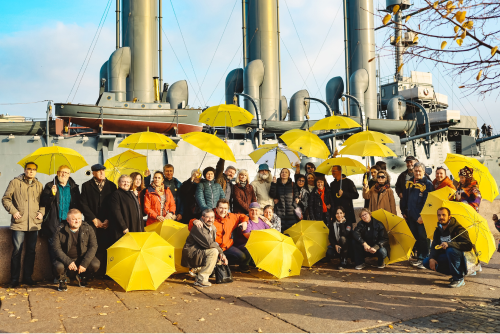 On October 17, the four-day XIX International Literary Festival "Saint Petersburg Bridges" ended. The event held with the support of the Creative Universe Foundation, brought together poets, prose writers, literary critics, publishers and curators of literary events from different cities of Russia and other countries.

The authors have performed in galleries, concert halls and bookstores of Saint Petersburg for four busy days. Some of the poems were set to music, and the readings were complemented by incredibly soulful bardic songs. Long-term participants of the festival, poetry experts shared their creations and gave a warm welcome to young poets who performed at the festival “Saint Petersburg Bridges” for the first time. Despite of a wide variety, one could feel the power of love, worry about close and dear people, stress about reality in all the works.

In addition to reading poetry, the festival did not leave without attention the topical issues of supporting writers at the state level: members of the project "Literary Residence of the Association of the Union of Writers and Publishers" shared their impressions of the fourth race in Komarovo, discussed the prospects for such a format of work. The discussions also touched upon the issues of modernization of literary festivals, their importance for the exchange of experience among literary figures.

This year, authors from abroad also could take part in “Saint Petersburg Bridges”: prose writer, poet, translator Päivi Nenonen (Finland) and prose writer Valentin Maslyukov (Belarus). And writers from Canada, Argentina, Sweden were connected with the participants of the festival by a teleconference which took place in the panoramic hall "Creative Universe". From a bird's eye view, many norms are ignored and it is only lynchpins that remain based on the idea of creativity which connected all the participants of the past festival.

“Actually, while many people in the world are erecting walls that separate countries, we are building bridges that connect cultures”